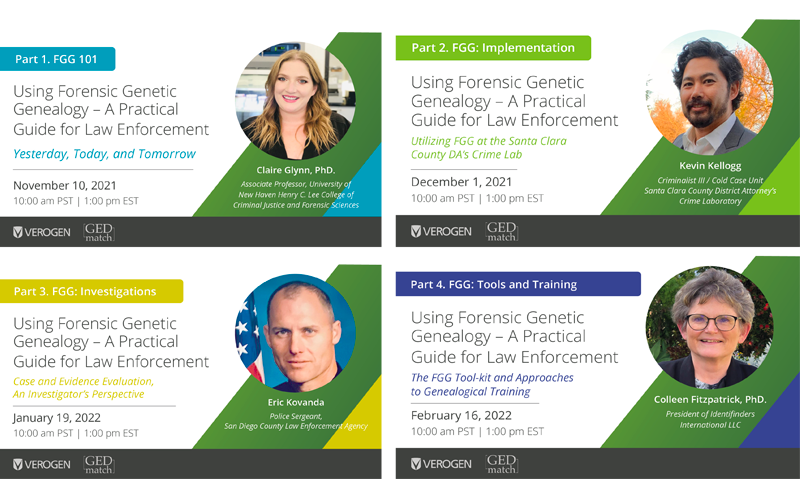 Forensic Genetic Genealogy (FGG) emerged in 2019 as a novel and groundbreaking way of solving crimes or identifying the missing and continues to make headlines today. As a result, there is no shortage of content covering this important forensic technique ranging from simple blog posts to graduate-level certificate programs so where do you start? This webinar series is an entry-level but wide-ranging course intended for law enforcement professionals who want to incorporate FGG into regular practice and require practical guidance on how, when, and why to use the technique.  At the end of the series, attendees will have a clear understanding of the benefits as well as challenges of FGG and how to go about adopting it.

In this series attendees will learn:

This four-part webinar series is brought to you by Verogen, the steward of GEDmatch and GEDmatch PRO and the only company committed exclusively to the innovation, development, and commercialization of next-generation sequencing (NGS) technology for forensic and human identification applications

Part 1, FGG: Yesterday, Today, and Tomorrow
Available On-Demand Upon Registration For The Series

Claire is an Associate Professor in the Department of Forensic Science, in the Henry C. Lee College of Criminal Justice and Forensic Sciences, at the University of New Haven, Connecticut. Claire previously was employed as a Forensic Biologist within the homicide and sexual assaults team at LGC Forensics (now called Eurofins), the UK’s leading forensic science provider for major crime investigations. After obtaining a Ph.D. in breast cancer research, Claire joined the faculty at the University of New Haven in 2014, where she teaches undergraduate and graduate courses and conducts extensive research focused on forensic biology, forensic DNA analysis, and forensic genetic genealogy. Claire is the Founding Director of the Online Graduate Certificate in Forensic Genetic Genealogy at the University of New Haven, which is the first program of its kind in the United States, and she actively consults and provides subject matter expertise on the topic.

Kevin Kellogg is the Cold Case DNA Criminalist at the Santa Clara County District Attorney’s Crime Lab. In this role, Kevin works closely with the DA’s Cold Case Unit and LEA cold case representatives. He has been working as a DNA analyst since 2005 and has also been employed as a Criminalist with the California Department of Justice and the San Francisco Police Department.

Eric Kovanda is a police sergeant with the Carlsbad Police Department in San Diego County, California. In his career of over two decades, Eric’s assignments have included serving as a lead investigator with the Cold Case Unit at the Connecticut Chief State Attorney’s Office, taking a leading role in the Connecticut Intelligence Center (CTIC) following 9/11, where he was a federally sworn Task Force Officer (TFO) working with the FBI’s Field Intelligence Group on counterterrorism, as well as experience working with the FBI’s Violent Crime Task Force with a focus on Gang Violence. Eric was the lead investigator on San Diego County’s first case solved using FGG, the murder of Jodine Serrin. Eric is currently an instructor with the National Criminal Justice Training Center (NCJTC) where he teaches a course for law enforcement titled Enhancing Investigations with Genetic Genealogy.

Part 4, February 16, 2022
The FGG Toolkit and Approaches to Genealogical Training

Dr. Fitzpatrick has collaborated with the top organizations in the field, including the Henry C. Lee Institute of Forensic Science, Armed Forces DNA Identification Laboratory, the US Army Casualty and Mortuary Affairs Office, the Simon Wiesenthal Center in Jerusalem, the University of Arizona, Harvard Medical School and law enforcement agencies nationwide. Dr. Fitzpatrick has also been a key member of teams that have exposed two international Holocaust literary frauds.

Dr. Fitzpatrick received her PhD in Nuclear Physics from Duke University. She worked for 25 years on the development of high-resolution laser measurement techniques for NASA, the Department of Defense, and other government agencies. A multilingual world traveler, Dr. Fitzpatrick specializes in international cases and has researched in over 50 countries. She also lectures and teaches widely in the US, Canada, Europe, Australia, and New Zealand.

Colleen has appeared in hundreds of domestic and international newspapers and magazines and on international radio and television programs. These include the New York Times, BBC World News Tonight, RTE Ireland Television’s Nationwide, The Melbourne Sun, Radio New Zealand, Japan’s Nippon TV, CNN, NPR’s Talk of the Nation, More Magazine, Scientific American, The Wall Street Journal, Publisher’s Weekly, and more. She is a member of the American Academy of Forensic Science and the Vidocq Society.